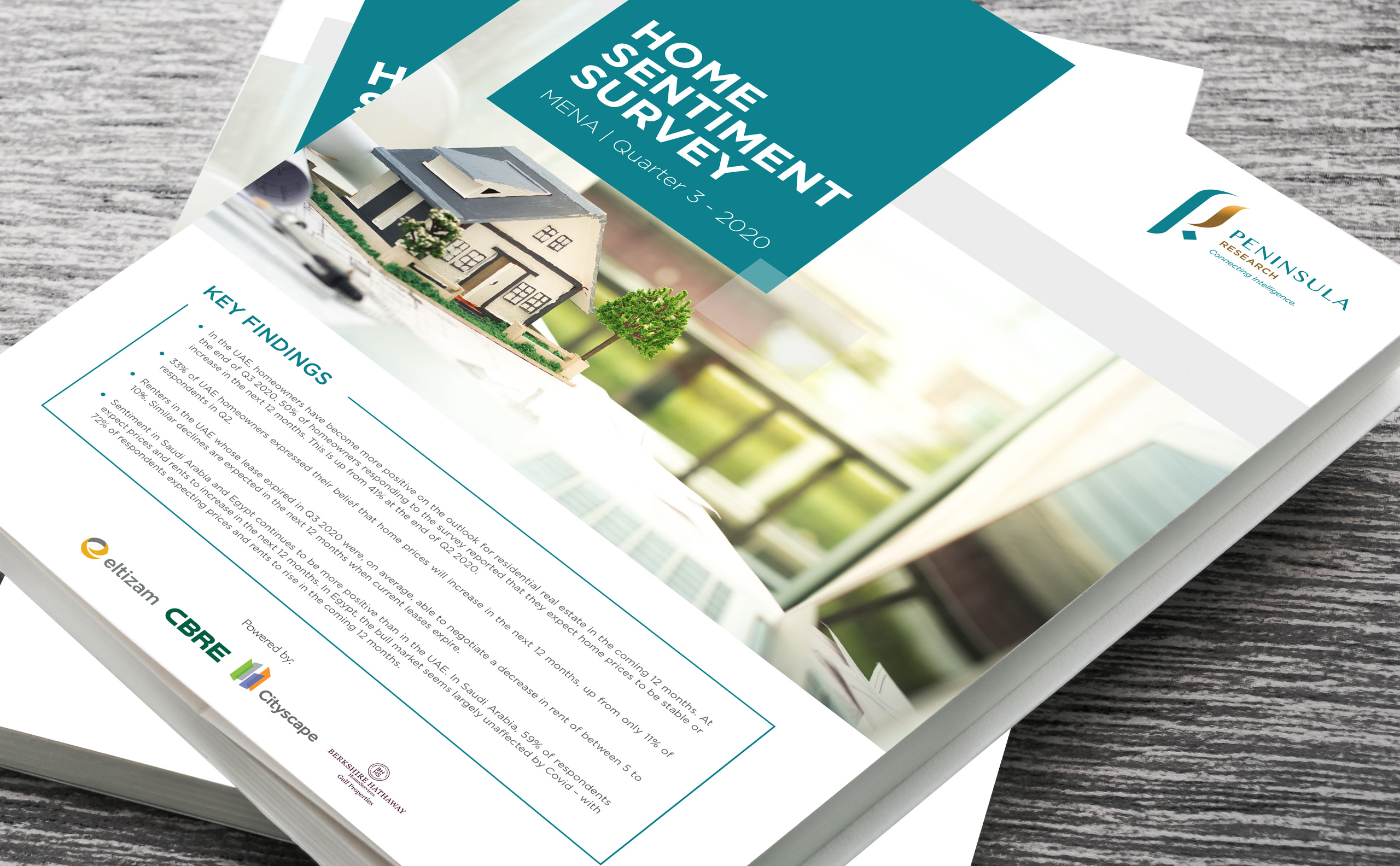 UAE homeowners see light at the end of the tunnel; while renters look forward to lower rents in the next 12 months. Saudi Arabia and Egypt respondents are more bullish

With the most stringent of the Covid-19 lockdown measures having taken place in the second quarter, and with economic activity picking up in the third quarter, homeowners’ sentiment towards real estate has improved, albeit modestly. As with Q2, in Q3 the most bullish sentiment could be found in Egypt; and in the Gulf, sentiment in Saudi Arabia was noticeably more positive than the United Arab Emirates. Within the UAE, 50% of owners expect to see prices remain stable or increase in the next 12 months; whereas 80% of renters are expecting to negotiate lower rent when their current lease expires.

In the UAE, renters whose lease expired during Q3 were able to negotiate significant decreases. Roughly a third of all respondents reported seeing their rent decline by 10% or more; 46% reported a decline in rent of less than 10%. No respondents reported rent increases. Overall, the survey suggests that rents in Q3 2020 versus Q2 2019 fell by between 5 and 10%.

The vast majority of UAE renters (80% of respondents) continue to believe that rents will fall as leases expire in the coming 12 months. While concerning for landlords, this figure is marginally lower than in Q2, when 84% of renters reported expecting their rent to fall in the coming year. The responses also signal that the rate of decline is slowing: in Q2, for instance, 36% of respondents expected rents to decline by 5 to 10% in the coming 12 months; this proportion has now fallen to 28%.

Homeowners in the UAE are significantly more positive on the outlook for the next 12 months than renters. This may reflect their own interests. However, given that rent negotiations are backward looking, incorporating market movements over the past 12 months, more positive sentiment from homeowners may be a genuine signal that there is light at the end of tunnel for the housing market.

At the end of Q2, 59% of homeowners reported their expectation for home values to fall in the following 12 months, with around half of those expecting prices to decline by 10% or more. In Q3, this number has fallen to 50%, with just under two-thirds of this group expecting prices to fall by less than 10%.

Of the 50% that believe that prices will remain the same or increase in the next 12 months, two-thirds (or 33% of the all respondents) believe prices will increase, one-third that prices will remain the same. This is a significant shift from Q2, when only 11% of all respondents thought prices would increase in the next 12 months. A significant portion of respondents appear to view Q2 2020, and the deep Covid-related economic slowdown, as marking the lows of the current real estate cycle.

In summary, in the UAE, while overall sentiment remains negative, respondents to our survey are signalling that the rate of decline has slowed. But it is clearly too early to say that the market has stabilized.

Sentiment continues to be better in Saudi Arabia and Egypt than in the UAE. Saudi’s residential market, particularly in Riyadh, rebounded strongly in the second half of 2019, on the back of better non-oil economic growth and a boom in the mortgage market. While sentiment has probably taken a hit from Covid, the majority of respondents in Saudi Arabia (59%) still reported expecting prices and rents to increase in the next 12 months. In Egypt, the bull market seems largely unaected by Covid – with 72% of respondents expecting prices and rents to rise in the coming 12 months. Inflationary expectations appear to be well entrenched. 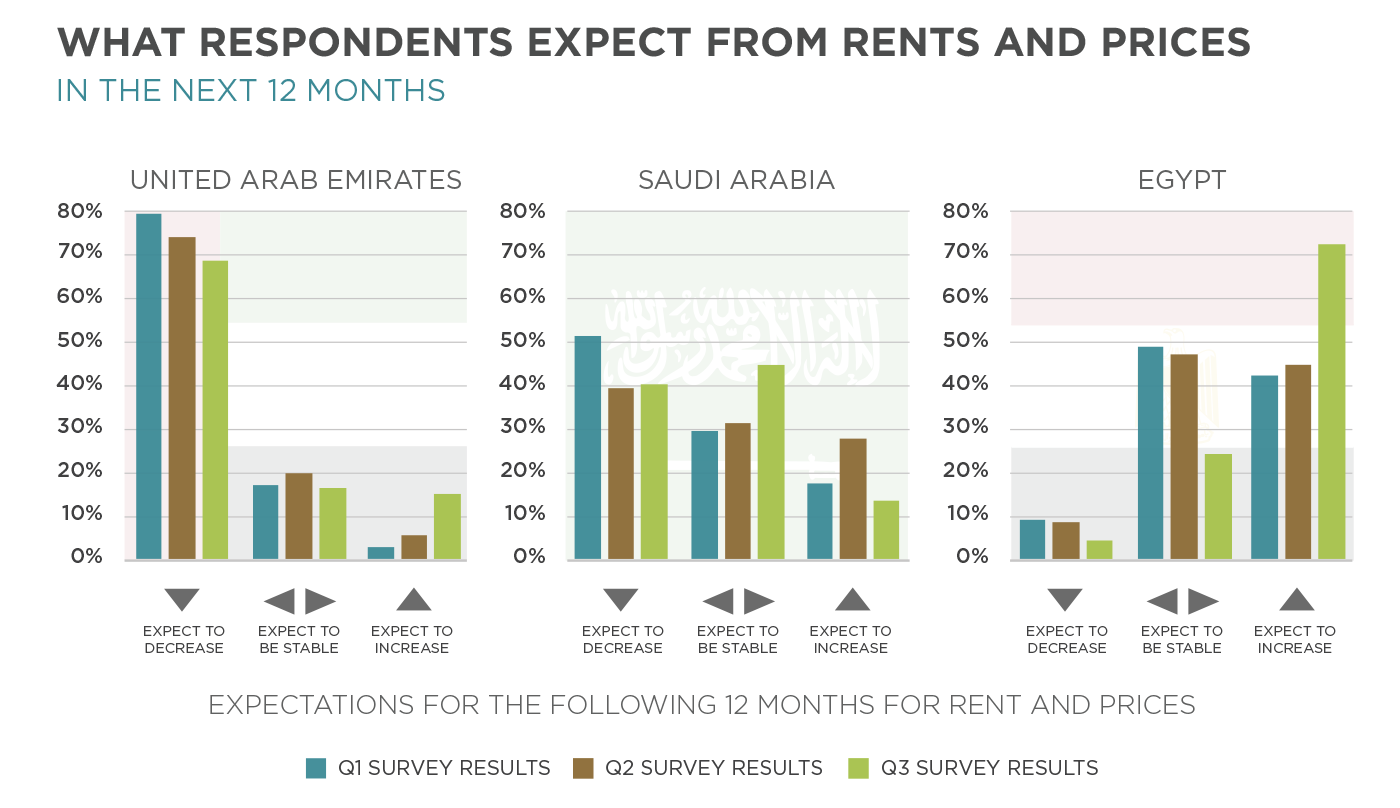 What is a Home Sentiment Survey?

A Home Sentiment Survey measures consumer sentiment towards the residential property market. It allows for the creation of an index, which is derived from regular surveys of a representative sample of homeowners and renters. The survey can determine sentiment regarding buying, selling, investing in, renting of and renovating property, as well as property market conditions in general.

Why do a Home Sentiment Survey?

Survey findings are useful in informing a variety of decisions made by stakeholders: from developers, government authorities, individual buyers, renters and investors.

Where did we collect data from?

This report has been issued by Peninsula Real Estate Management Limited (“Peninsula”) for informational purposes only. It does not purport to be a complete analysis of the topics discussed, which are inherently unpredictable. It has been based on information collected from raw data sources, which Peninsula believes to be reliable. Peninsula has not independently verified those sources and makes no guarantee, representation or warranty as to its accuracy or completeness. The data published in this report is based on responses that we received to a questionnaire sent out by Peninsula during March 2020 and more widely distributed through our partners Eltizam, CBRE, Cityscape and Berkshire Hathaway Home Services. The raw data has not been amended, weighted or seasonally adjusted; we do not, therefore, claim the findings to be statistically significant; nor, as a result, can we guarantee that they accurately reflect real estate sentiment in the MENA region. The sentiment measures published in this report should not be assumed to be accurate predictions of future property market performance. Peninsula accepts no responsibility or liability in respect thereof or for any reliance placed by any person on such information. All opinions and views expressed in the report reflect our judgment at this date and are subject to change without notice. Statements that are forward-looking involve known and unknown risks and uncertainties that may cause future realities to be materially different from those implied by such forward-looking statements. No investment or other business decisions should be made based on the views expressed in this report. This document may not be reproduced or circulated without the prior written consent of Peninsula.

Get the latest information and be amongst the first to know and stay updated on the go. Join our mailing list now.